As with diet and exercise, meditation is one of those things that I always mean to improve on, but struggle to do consistently over the long haul. I’ve sometimes managed to meditate at least once-a-day for 15 or 20 minutes for several months in a row--then it goes down to most days, and finally tapers off to never. A new study, however, says I should give it another shot, but this time with the help of a trained counselor.

Specifically, the study showed a type of therapy called Mindfulness-based therapy was at least “moderately effective” (their words not mine, so I can’t explain what modest means in this case) in treating anxiety and reducing symptoms of depression. The study actually involved crunching the data from 39 other studies of the technique.

The authors of the study conclude, “These results suggest that mindfulness-based therapy is a promising intervention for treating anxiety and mood problems...”

Overweight Girls Don’t Always Like Themselves After Losing the Pounds 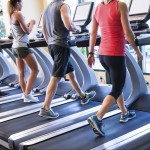 Working Up a Sweat Helps Extinguish Burnout and Depression