Living near parks or forests lowers the amount of stress suffered by the unemployed, according to a British study published in Landscape and Urban Planning and reported by the University of Edinburgh.

For the study, researchers took saliva samples from a group of unemployed participants, ages 35 to 55, to measure their levels of cortisol, a hormone the body makes in reaction to stress. Scientists found that when participants lived in locations where less than 30 percent of the surrounding areas were green spaces, their cortisol rose to an unhealthy level. What’s more, researchers noted that each extra 1 percent of green space in a participant’s environment lowered his or her stress levels.

Researchers found that the prevalence of green space made a bigger impact on participants’ stress levels than age, gender, disposable income or economic status.

In addition, when scientists asked participants to self-report how much stress they were under, those who had more green space said they were less stressed. (Participants who exercised showed less stress as well, but this was true whether or not they lived in an area with lots of green space.)

What’s the takeaway here? Whether greenery helps protect you from stress or lets you cope better under pressure, taking steps to go green—such as moving somewhere greener, walking or driving to nearby green places, or just starting a garden or putting some potted plants in your place—should help make life a little less stressful.

Click here to read more about the effects of unemployment on mental health. 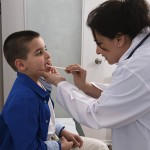