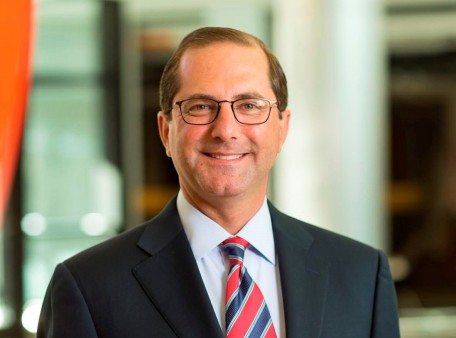 He’ll oversee the FDA, Medicare and Medicaid at a time when soaring drug prices remain a contentious political topic.

The Senate confirmed Alex Azar as the next secretary of the Department of Health and Human Services, NPR reports. He is a former president of the U.S. division of pharmaceutical company Eli Lilly & Co.

In his new post, Azar will oversee the Food and Drug Administration (FDA), which regulates prescription drugs. He’ll also preside over Medicaid and Medicare.

He replaces former HHS secretary Tom Price, who resigned in September over reports that he used private charter aircraft instead of cheaper flights for work-related travel.

Azar’s appointment comes at a time when high drug pricing is a contentious political topic. He has been criticized because, during his tenure at Eli Lilly, the company was named as a defendant in a lawsuit alleging that Eli Lilly fixed prices of its insulin, resulting in a higher price tag for consumers.

During his confirmation hearing, CNN reports, Democratic senators brought up the issue of drug pricing.

“Mr. Azar told committee staff that while he chaired the company’s pricing committee he never—not even once—signed off on a decrease in the price of a drug,” said Senator Ron Wyden of Oregon in the CNN article. “The system is broken. Mr. Azar was a part of that system. Given ample opportunity to provide concrete examples as a nominee of how he’d fix it, Mr. Azar has come up empty.”

Azar countered that his experience in the pharmaceutical industry makes him better suited to tackle rising drug costs, reports CNN. Regarding proposed cuts to Medicaid, Azar said that he doesn’t support reducing funds and expansion but wants to slow the rate of growth for sustainability.

However, when Trump first picked Azar for the HHS position, the national HIV nonprofit The AIDS Institute issued a statement in support of the nomination. (For more, click here.)

Azar became the president of the U.S. branch of Eli Lilly & Co. in 2012; he left Lilly USA in January 2017. Azar previously served in HHS as general counsel and deputy secretary under President George W. Bush.

Azar is a 1991 graduate of Yale Law School (read his alumni profile here), and he clerked for Supreme Court Justice Antonin Scalia. Before working for Bush’s 2000 presidential campaign, Azar was part of the legal team that investigated President Bill Clinton’s investments in the Whitewater real estate development and was led by Azar’s mentor, independent counsel Ken Starr.